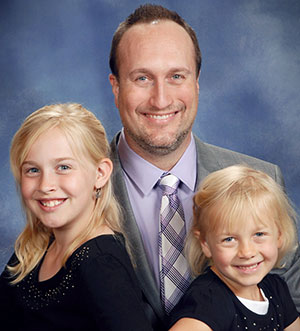 A native of Missouri, Dr. Markway is devoted to his two daughters, Jillian and Jaclyn. When he’s not playing ‘taxi-dad’, shuffling the girls between volleyball and gymnastics, he loves hiking and anything that allows him to be outdoors. He also enjoys trying out new restaurants; particularly those specializing in Korean or Japanese fare.

While he is known among his patients for his cheerful and positive personality, he is very serious about delivering the highest level of clinical care to every patient. He earned his undergraduate degree in biology from the University of Missouri before receiving his dental degree from the UMKC School of Dentistry in 2001. And, he has continued to be an active participant in continuing education programs ever since.

Dr. Markway practiced for several years in Lawrence, before coming to Gardner, KS where he has been practicing since 2004. He is a member of the American Dental Association, the Kansas Dental Association and the International Dental Implant Association. In addition, he is certified to provide conscious sedation (help you relax) and create beautiful, straight smiles with Invisalign® and Clear Correct. At the end of the day, he loves to play a part in improving people’s confidence by creating beautiful smiles.

Back to the Team